Persuasive and passionate primer about the climate emergency

EMBODYING the honesty, alarm and radicalism of Extinction Rebellion (XR), This Civilisation Is Finished is short and discursive. 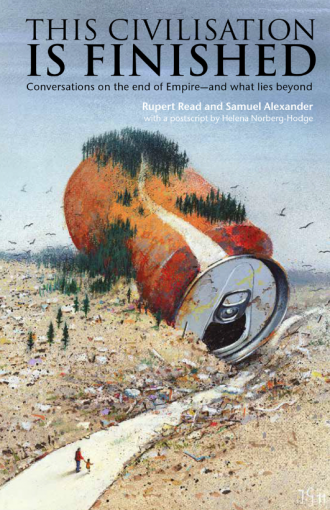 It consists of email exchanges and Skype conversations between Dr Rupert Read, Reader in Philosophy at the University of East Anglia and key figure in XR, and Dr Samuel Alexander, co-director of the Simplicity Institute in Melbourne.

“Civilisation is going down. It will not last,” is Read’s stark analysis of humanity’s future. “We will most likely see 3-4 degrees of global over-heat at a minimum and that is not compatible with civilisation as we know it.”

This means that our “industrial-growthist civilisation” will be transformed and it’s just a matter of how, he argues. Civilisation could either collapse utterly and terminally or manage to seed a successor civilisation as it collapses. Or it will somehow manage to transform itself.

With our civilisation showing almost no sign of taking the climate crisis seriously, Read believes that the first and second scenarios are most likely.

The discussions range far and wide — references stretch from the film Avatar to economist Milton Friedman — with Alexander warning of the problems of “soft-climate denial,” which ignores the scale and urgency of the crisis and “techno-optimism,” the belief that technology will be able to solve the major social and environmental problems of our time without changing the fundamental structure of society.

Considering the dominant economic systems of both left and right-wing governments, Read argues that encouraging economic growth is an insane ideology on a planet which is already breaching its climate and ecological limits.

Though pessimistic about the future of the planet, Read urges readers to get involved in activist and political movements to combat climate change. However, he notes that the task of XR and other climate activists is harder than the US civil rights movement XR takes inspiration from – it is, after all, “challenging our whole way of life.”

At times frightening but always thought-provoking, This Civilisation Is Finished is likely to be a life-changing book for some people.

“I would ask every reader who has made it this far to get serious about this,” Read concludes.“What are you going to do to manifest what is now called for?”